Article originally posted by Lisabeth from The Ultimate Chocolate Blog

So you might be asking, what is 'cacao tea'? The answer is immediately clear to a chocolate maker, but slightly more complex to explain for those who have no knowledge of cacao and cocoa beans. So I'll start from the beginning: 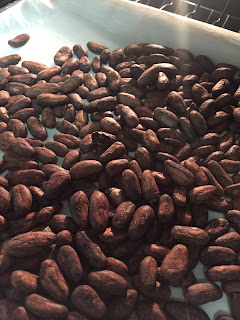 Chocolate is made from cacao or cocoa beans, which grows in a bright-colored pod on the cocoa tree in warm climates. The beans and pulp are removed from the pod, fermented for several days, then drained of the remaining pulp and dried, usually in the sun.  What is left is a bean, with a husk on it (picture the husk on a hazelnut or almond, only a little stronger, thicker and 'crunchier', so it is more difficult to remove). The beans are roasted with the husk on, then the husks are removed by hand, or the beans and husk are crushed together, then run through a winnower that essentially blows the husks off of the bean pieces to separate them.

Chocolate is made from the beans, with the husks removed. And the husks are simply discarded, only saved sometimes for use in gardens as lovely-smelling mulch.

But now, an ingenious idea has formed as a way of making use of the discarded husks: Cacao Husk Tea.

I recently had the opportunity to taste a brand of cacao husk tea calledMiCacao, sent to me by company owner John Sabia. MiCacao is a start-up producer of 'South American Cacao Tea', sold online in the United States.

I first tasted it plain, with no milk, sugar or any flavours added to it, since I drink most tea like that. I found it had a strong aroma of cocoa, but the taste was very mild, and easy on the palate. Overall, it was enjoyable, and the sort of ease with which peppermint tea goes down. See below for a few different ways that I enjoyed this tea, with recipes you can try. 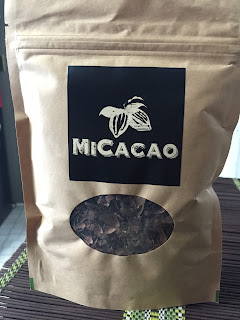 So why drink cacao tea over other teas? For starters, there are reported health benefits, including antioxidants, iron, magnesium and mood enhancers like Serotonin and Anandamide. According toLivingmaxwell.com, the cacao shell is high magnesium, potassium and Vitamin D, and like chocolate and cocoa, it also contains Theobromine, which is supposed to raise our serotonin levels, which "increases feelings of well being".

But since these are the husks or shells of the cacao beans, I am not sure how much they contain in comparison to chocolate. Likely significantly less than chocolate, but if that is the case, there should be less caffeine than in chocolate - a bonus for those of us trying to reduce our caffeine intake. So if you are choosing between brewed cacao beverage, such as Crio Bru, where the beans are ground without heat so they can be brewed like coffee, you might choose MiCacao tea for a similar flavour but lessened caffeine (please keep in mind that regardless, chocolate does have less caffeine than coffee).

Are there concerns with drinking cacao husk tea? I have seen in online forms that some people are concerned about cacao husk tea because of potential bacteria being left on the shells, or possible pesticides.  But pesticide use should be on the outer pod only, before the beans and husks are removed (unless perhaps if sprayed for shipping, but again they'd be in bags and crates), and since MiCacao is 100% organic, there should be no pesticides used on this brand. The beans are also roasted with the husks on, which kills bacteria. And Mr. Sabia had the product tested by a US food inspection facility, and it passed with flying colours.

How is it packaged?

MiCacao comes loose in a 0.2 lb bag, or in a bag with 12 tea bags so you can more easily travel with it or have it at work. The loose version gives you more value for your money, but there are definitely benefits to the convenience of tea bags. I would try combining a peppermint tea bag or green tea in my cup with a MiCacao bag for added flavor or health benefits.

Lisabeth's Dark Roast MiCacao:
I tried a recipe on the MiCacao website for combining it with coffee.  But I did not have 'light' coffee, since I am a dark roast kinda girl, so it took a little perfecting, but I finally made an enjoyable mix. Here is my own recipe for MiCacao and coffee:

Instructions:
Brew together the MiCacao and Coffee in a French Press, let steep for five minutes. Pour into a mug and add the cream and sweetener. Stir and enjoy! 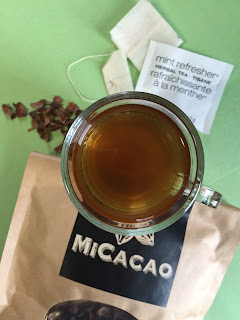 I also enjoyed MiCacao with peppermint tea, and drank this mix on several occasions.  Here are the instructions if you'd like to try it to:

Instructions for Loose Tea:
Place your two tablespoons of MiCacao in the bottom of a French press or loose tea steeper pot, then open the peppermint tea bag with scissors and add to the MicCacao. Pour in 1 cup of boiling water and let steep 5 minutes. Pour into a cup and enjoy!

Instructions for Bagged Tea:
Place one MicCacao tea bag in a cup with one peppermint tea bag. Fill with 1 cup of boiling water and let steep 5 minutes.

There are other recipes on the MiCacao website.  You can find them here.

Article originally posted by Lisabeth from The Ultimate Chocolate Blog